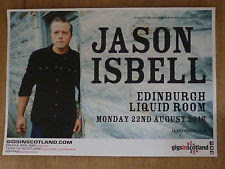 This was the first of Jason’s two sold-out Edinburgh gigs, with which he was closing his short European Tour.  700 bodies The Liquid Rooms (officially) holds and, whilst I am not suggesting for one second that the venue management had squeezed a few more in this evening, l would suggest that those 700 must have been a pretty well-nourished bunch, as space (and, indeed, oxygen it felt at times) was of a premium.  There was one bod near to me who simply keeled over and had to be carried away by a couple of medics.  Heat exhaustion and nothing more sinister I hoped.

Palmetto Rose and 24 Frames opened the show this evening, both appearing oddly turgid affairs; each slowed down slightly but noticeably.  But once the band got into their groove with Stockholm and the Stones-influenced Go It Alone they never left it.

Travelling Alone and Codeine were both superb, with the throng singing along to each word-perfect.  And Jason’s work with his co-guitarist - the marvelously named Sadler Vaden (I wish I was called Sadler Vaden) – on his Drive-By Truckers’ covers Decoration Day and Never Gonna Change, ensured even the most geetar-blowout hungry attendees went away more than happy.

“He is the bastard offspring of Neil Young and Bruce Springsteen” asserted a chap in front of us as we filed out.  But there is far more (and, thankfully, simultaneously far less) to Jason than that simplified summation would suggest.