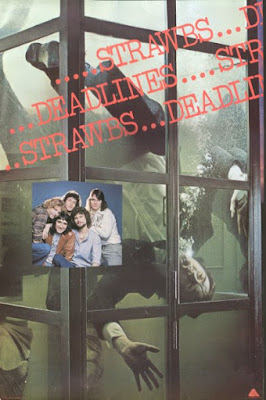 I sort of ended up at this one by accident really.  I had arranged to go through to for a night on the tiles with my friend P, who was at at the time.  We noted the Strawbs were playing at the Students’ Union so detoured there for the evening.

I didn’t (indeed, still do not) know much about the Strawbs, other than Dave Cousins sort of led the band.  I remembered their hit Lay Down, of course, and the rather less successful Shine on Silver Sun.

Part of the was another hit, but I was aware the two guys who wrote the song had moved on, so was unlikely to hear that one given an airing.

We had been at the bar in the for around half-an-hour when P noticed a young lady whom he had been chasing for some time so, clearly not wanting his moves encumbered by having a fresh-faced imbecile in tow, he begged his leave and swaggered off leaving me to watch the concert alone.

The concert area in the was an odd place, with what seemed like dozens of pillars obscuring the stage.  One’s only chance of getting a decent view of proceedings seemed to be to squash up very close to the front, but this area had already been taken over by a gaggle of sitting cross-legged folkies, so I had to settle for peering out from behind one of the pillars whilst cradling my beer.

I can recall now next to nothing of the concert, other than that the band played their trump card (Lay Down) first, but did not play Shine on Silver Sun.  The set list (below) I found on the web recently and, although it states a rendition of The William Tell Overture (or the Theme from The Lone Ranger, as I would have known it back then), was incorporated into the set, even this memorable tune has been wiped.

I do remember thinking it seemed quite a short set, and just as it finished P turned up looking exceptionally smug and handed over the keys to his room, informing me he would not be going back to the Halls of Residence that night.

Thus it was I toddled back to Pollock Halls alone, stopping at a Chinese takeaway on Salisbury Road for a chicken curry (a curry from a Chinese takeaway being my idea of gastronomic sophistication back in those Vesta Days).  But hurrying across the busy Dalkeith Road I succeeded in dropping the sauce container, and watched in dismay as a car flattened it.  This may be time playing tricks on my mind, but I am sure the driver swerved for it, rather in the manner of Jerry Lewis with Captain T.G. Culpepper’s hat.

Ten minutes later found me in P’s room glumly eating dry fried rice for my supper, idly wondering just what P was eating at that point.

The Hangman And The Papist