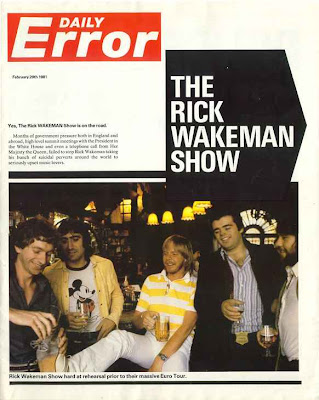 Odeon
I had, of course, seen Rick Wakeman before, with Yes at the Glasgow Apollo in 1977.  By “seen”, I mean occasionally glimpsed him from the chest up, as I craned my neck to reach the 8ft high stage.  I can also recall seeing Rick and his band – The English Rock Ensemble - in concert on TV sometime around 1976.  Clearly having imbibed more than a few lemonades prior to the gig, Rick and his buddies had whale of a time on stage.  This was the first time I had been introduced to Rick’s rather unique sense of humour, and his talent as a raconteur.
His wit also flourished in the concert programme this particular evening; a spoof on a tabloid newspaper – The Daily Error – complete with silly articles, a medical problem column and a page 3 girl (of sorts).  There were numerous beer-related jokes inside, with the band members being mercilessly referred to as Bog Head, Captain Beaky, Fatty and (perhaps least PC) Greasy Wop.  Those were, indeed, different times.

A reputation for being the Joker in the Pack can occasionally backfire, however.  As evidenced when Rick himself introduced the support act from backstage.  “And now, I would like you to welcome the most exciting new dance act in the country” came his disembodied voice, cueing hoots of laughter.  “No, it’s not a joke” he hastily added, “It’s Sponooch”.  And onstage ambled the Hot Gossip splinter faction, who proceeded for the next half-hour or so to energetically cavort, to everyone’s general indifference.
I could see why Rick had felt the need to introduce them personally, for without his testimonial, I am sure the dancers would pretty promptly been invited to “Get tae Fuck” by one or other of the audience.  Quite what sort of welcome they had received at the Glasgow Apollo the night before, I could not imagine.
It is a weird trick of memory that, despite the fact I know this gig had been a real fun evening, nowadays I can barely recall any details at all.  I think the band opened with Arthur – you know, the Election Night Special Theme one, with websites suggesting this perhaps segued into Sir Galahad.

I know they played Merlin; cause Rick introduced it with his “marshmallows into a moneybox” joke – a reference to the old magician’s impotence.  Anne Boleyn was aired, as were a couple of Catherine’s – the Howard one apparently being Wife-to-Be’s “favourite ever piece of music” ………that week.  Her musical tastes being nothing if not capricious.
A chopped-down version of Journey To The Centre of the Earth (I think) closed the set, and I remember feeling the band achieved as good a version as could be expected, without the help of neither an orchestra nor choir.  In between these tunes were sandwiched a brief punk-rock parody, with Rick pogo-ing around the stage spitting beer (you had to be there), a sprightly version of White Rock, and a wonderfully silly piece of hokum entitled The Spider – Rick’s latest unsuccessful assault on the singles charts.
I recall nothing being performed from No Earthly Connection, Criminal Record nor Rhapsodies, but I am sure there must have been at least a few snippets.  One piece I know he did not perform was After The Ball.  I know ‘cause I was in love with this understated masterpiece at the time – still am, I am not ashamed to state.  I consider it to be quite the most beautiful piece of music the Man has ever composed.  On a cassette tape somewhere, I have an orchestral recording of After The Ball by the Royal Philharmonic Orchestra, which I feel is superior even to Rick’s original.  I have never come across this version on YouTube, so may upload it myself one day, if the Bastards ever give me back access to my channel.