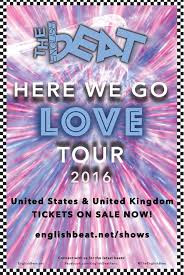 There are two Beats presently doing the rounds this Autumn.  We have “The Beat” and “The English Beat”.  Although, in reality, neither truly are The Beat (are you keeping up?).  For the original Beat to all intents and purposes died in 1983 when co-vocalists Dave Wakeling and Ranking Roger decamped to form the short-lived General Public.

The English Beat was the name the original band were compelled to use across the pond, there being I assume another The Beat already around stateside at the time.   So I suppose it makes some sort of sense for the now California-based Wakeling to use the English prefix for his band, leaving the England based Ranking Roger to utilise the unadorned moniker.

So, which is best?  As Harry Hill may have said: "There's only one way to find out.......Fight!!"  Well actually no.  For unlike the Wishbone Ash name bicker-fest going on, there does appear to be a bit of live and let live at play here.  Perhaps I need to pitch up to view Roger's version next month, to make up my own mind.

The English Beat presently houses the aforementioned Wakeling, plus a suspiciously convenient Ranking Roger lookalike/soundalike by the name of King Schascha, who opened the gig by lightheartedly apologising for not being Ranking Roger.  The current sax player – a coincidence, I am sure – also bears a more than passing resemblance to Dave Blockhead (who admittedly played keyboards in the old Beat).

I admit to being unsure quite what Wakeling has been up to recently, but this clearly was primarily a major nostalgia kick, with twelve of the songs in the set coming from either the 1980 debut album I Just Can't Stop It or non-album singles from around that time.

The group's second and third albums were represented by a single song from each (Doors of Your Heart & Save It For Later, respectively) – both of these being high points in the set, I felt.  It was a bit of a pity though that Wakeling chose to to ignore fine stuff from these later albums such as Get A Job, I Confess, Jeanette and End of the Party.  But then this was The (original) Beat's problem all along – the Rude Boys and Skinheads who came to the gigs just wanted to dance, and had little patience for Wakeling's increasingly subtle songwriting.

There were just two newish songs aired.  The Love You Give Lasts Forever would have a found a happy home on Special Beat Service, but it was hard to make much of a judgment on the rather more introspective Never Die, as the performance got lost in the general mayhem.  Indeed, it rather swiftly cleared the dance-floor, as folks took the opportunity to top up at the bar.

What has long been my favorite Beat song Too Nice To Talk To – an examination of the arcane politics of copping off in night clubs - was aired tonight.  I never got to grips with the process of chatting up girls in my youth, and even today the whole business baffles me.  A fact reinforced by a little vignette which was played out in front of me this evening.

For much of the evening to my left danced two young women – early twenties perhaps; one a tall beautiful blonde, her companion shorter and dark haired – pretty rather than gorgeous, I suppose one might say.

Toward the end of the gig, a clearly very drunk chap barged his way between the pair and attempted to join in with their dancing.  I thought they would just ignore him, or even wander off.  But the dark-haired one seemed to think his direct approach appealing, - perhaps being more used to being overlooked in favour of her more attractive friend - and presently he and she drifted off together, as Blondie wandered away elsewhere.

Well, Fair Play to the chap I thought.  For although he looked like the sort of bloke who empties your bins, and could barely stand so drunk was he, he had, by perhaps aiming low, somehow pulled the less prettier of the two with his neanderthal approach.  Had he thought the beautiful one too nice to talk to?

I gave the players in the little melodrama no more thought until, as I was exiting the venue, I was startled to see Mr Drunk and the Blonde one leaving the place hand-in-hand.  How the heck does that happen?

Driving home, I was put in mind of a line from another hit from back in the day:

“Pretty women out walking with gorillas down my street”.

Rough Rider
Tears of a Clown
Hands Off, She's Mine
Twist and Crawl
Rude Boy Skank
I'll Take You There
Save it For Later
Never Die
Whine and Grine/Stand Down Margaret
Too Nice To Talk To
Can't Get Used to Losing You
Two Swords
Best Friend
Doors of Your Heart
The Love You Give Lasts Forever
Ranking Full Stop
Mirror in the Bathroom
Jackpot