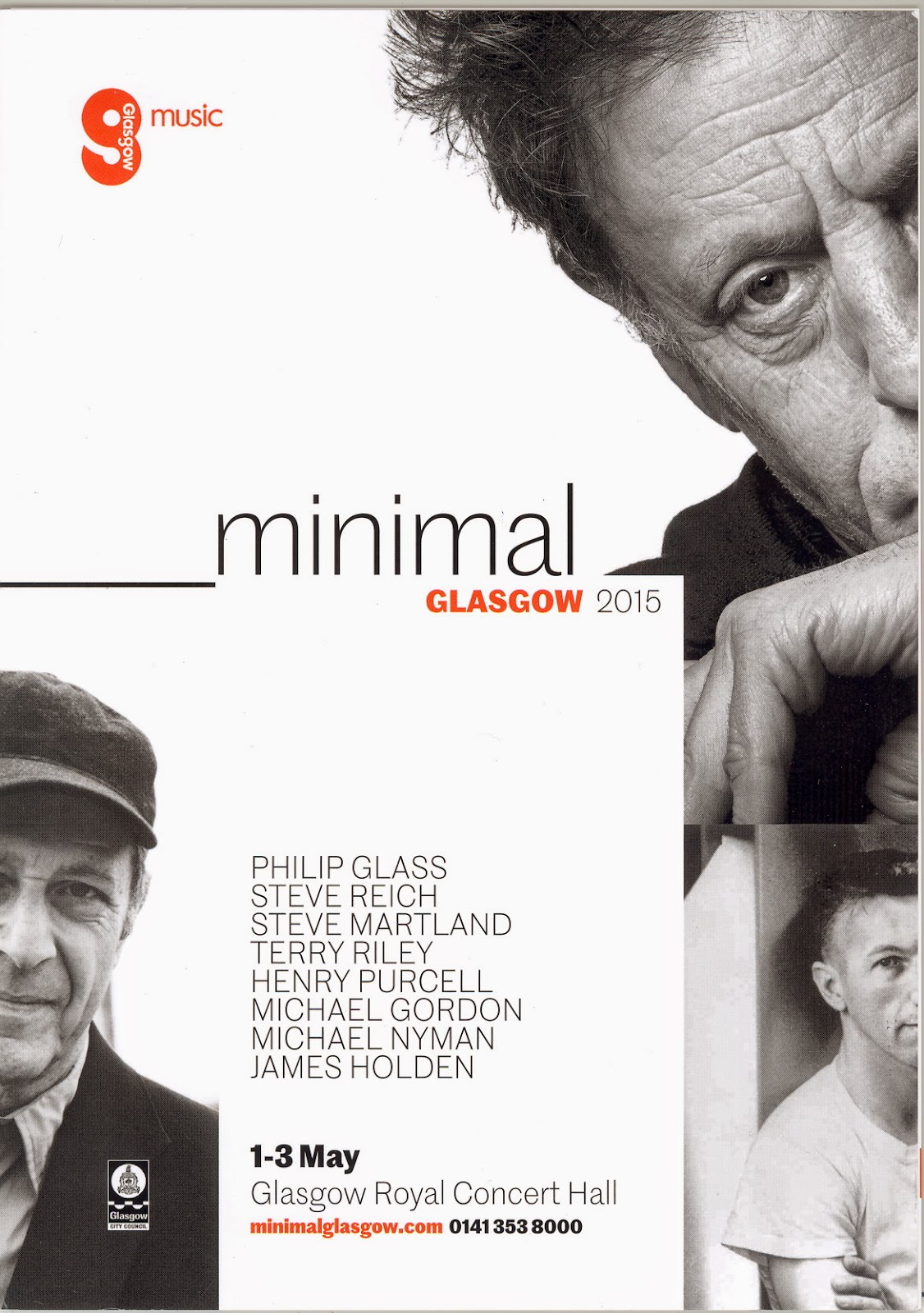 When I mentioned to a work colleague that I was planning to attend a Philip Glass concert, she somewhat bafflingly replied “Well at least you will get some peace and quiet”.  Asking her to explain, she asserted “He was the guy who did that four minutes of silence thing, wasn’t he?”


She was, of course, thinking of John Cage, but the fact the two composers can still be confused, I suppose, attests that to many people Mr. Glass is still inextricably linked to the avant-garde.  This despite the fact he has, since the mid-1970s, been producing work, if not quite in the mainstream then certainly utilising what I suppose may be described as rather more conventional compositional methods.  Witness his film soundtracks for Candyman, Hamburger Hill and Notes on a Scandal, to name but three.


I first began dipping my toe into his work when I discovered his Etudes – those twenty fiendishly complex pieces written for solo piano.  Indeed, Glass was in London just a few days ago to play just these very compositions.  I would really have liked to attend this performance, but upon discovering he was also visiting Glasgow to perform his Music in 12 Parts, I decided this would make an acceptable consolation prize.


I was less familiar with this piece, but knew it to be a bit of a magnum opus: lasting over three-and-a-half hours in total.  Fortunately for both the audience’s sanity and his Ensemble’s bladders, Glass tends to split the piece into four blocks for performance – Parts 1-3, Parts 4-6, Parts 7-9 & Parts 10-12 – each section nevertheless taking the form of a single chunk of music lasting around 55 minutes.  Phew.


There were 15 minute “pauses” after both Part 3 and Part 9 and (really rather wonderfully) a “Dinner Break” of an hour scheduled in the middle.  Thus it was, at the half-way point, we had the odd sight of the Glasgow Concert Hall emptying as folks spilled onto the streets making for chippies, Pizza Hut or one of the nearby restaurants depending upon the depth of their pockets.  It certainly represented a first for me to enjoy a black pudding supper midway through a gig.

Music in 12 Parts was composed by Glass during the early/mid Seventies, towards the end of his minimalist phase, and the whole piece relies very much upon repetition – lots and lots of it.  It is written for three electric organs, either two or three musicians playing saxophones/flutes plus a female soprano voice (Lisa Bielawa, this evening).


Attempting to give one an impression of the music is rather difficult.  Part 1 is markedly different from the rest of the composition and acts as a gentle introduction I suppose, although giving no indication of what is to come.  It is dream-like, pastoral and could almost be shoe-horned into the genre of ambient.  But then Part 2 crashes in with no break, and the three keyboard players together lay down an intricate network of repetitive arpeggio, over which is layered subtle interjections from the wind and reed instruments.  Soaring above all of the aforementioned, the female voice sings (or perhaps vocalises would be a better term) a beguiling repetition of solfege syllables.


But I could not help but think the vocabulary being used stretched beyond the traditional Do Re Me Fa So La Ti Do, for I am sure Bielawa was intoning at some point “Crazy, Crazy” over and over again.  There was also during Part 5 what sounded like "Vosina, Vosina", then later on “Jonah, Jonah" and, most intriguingly, "Semen, Semen".  All very odd, yet beautifully hypnotic.


Glass conducted proceedings by regularly giving a slow deep nod of the head to signify to the other musicians it was time to make some subtle (often too subtle for my ears) change to the progression.


Part 9, with its wilfully atonal keyboard runs, I have to say I found more than a little challenging, and caught myself struggling to disguise yawns.  The woman to my left’s method of coping was to begin discreetly sipping what smelt suspiciously like Drambuie from a hip flask she had secreted in her handbag.


During the final interval, a small part of me considered sneaking out, but decided NO.  The aurally challenging Part 9 had I decided clearly been a deliberate test of resolve.  Rather like Becher’s Brook in the Grand National it existed to weed out the weaklings, and only the truly committed would be allowed to sample the delights of parts 10-12.  So I gritted my teeth and resolved to persevere to the conclusion.


But I needed some change to my environment to recharge my enthusiasm so, noticing the stewards were taking a rather laissez-faire approach to policing the seating arrangements, I became possible the first person ever in the history of the Glasgow Concert Hall to voluntarily sneak into a cheaper seat – specifically one of those vacant towards the rear of the top balcony.  From where I was treated to….well, just more of the same really.


Glass had one final joke to play on us.  For, once the lengthy Part 12 eventually meandered to what I felt appeared to be a natural and a climatic conclusion to the whole performance,  the Ensemble proceeded to repeat the same climax not once more, not even twice more, but at least twenty times more.  Until juddering the whole business to a very abrupt end, to huge acclaim from the concert-goers.


As I left I thought there really should be some sort of medal awarded for sitting through the whole 12 parts.  But I was glad I had done so.  It is not terribly often one gets to hear a musical genius at play and Glass, presently 78 years young, I cannot imagine has too many return trips to Scotland in front of him.


About a year ago I had passed up the opportunity to attend a concert in Dunfermline by the great Ben E. King, deciding I would catch him next time around.  I learned on the drive home this evening that no-one will ever be catching Ben E. again.  Yep, Tempus is clearly Fugiting at an alarming pace. 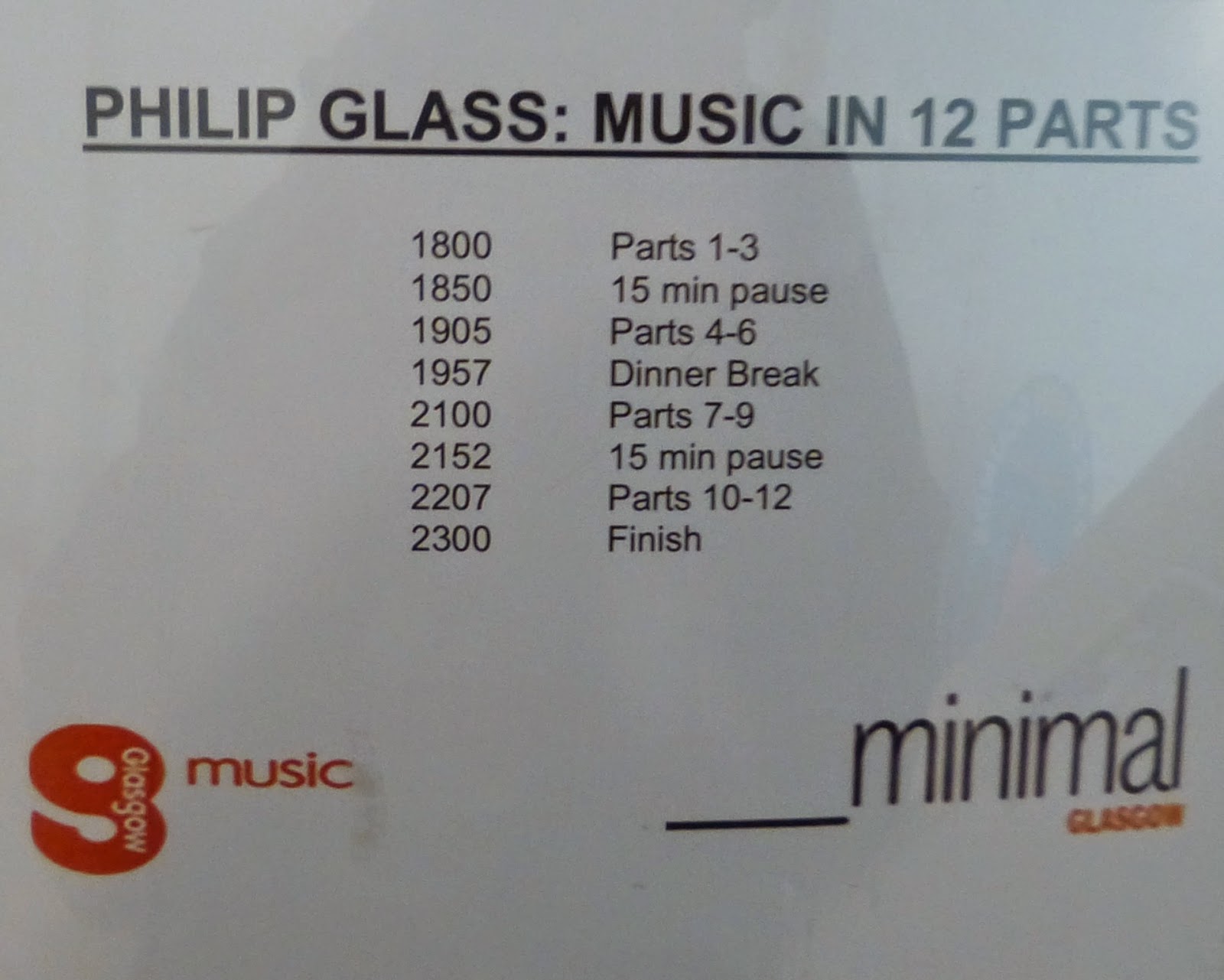