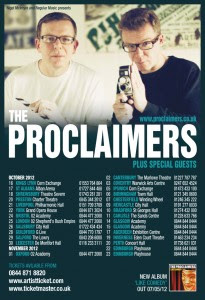 I find it slightly depressing, and not a little bit scary that it is now over a quarter of a century since I first saw The Proclaimers in concert.  Even more distressing for me is that whilst the Boys during that period enjoyed seeing one of their songs featured in the film Shrek I, by contrast, as the hair has disappeared and the weight has inexorably piled on, have found myself metamorphosing into Shrek.  I’m on my Way!

It being nine years since my last Proclaimers’ gig and, perhaps more pertinently, seven years since the last time I had bought a newly released album by the band, I realised I had a bit of homework to do before this concert: three releases to be precise.

For after seeing the band on three occasions in quick succession between 2001 and 2003, I had been perhaps a touch Proclaimered-out, so had decided to give the Restless Soul tour a miss.  Additionally, having heard the album I had been somewhat disappointed by it – and felt it was certainly their weakest to date by some distance.

The title track was excellent, rattling along as it did in a manner not dissimilar to Hollywood Nights, although Craig’s vocal performance was rather more restrained than Bob Seger’s.  D.I.Y. was a product of the twins’ quite unique blend of anger and wit, as was The One Who Loves You Now, but that was sort of it, I felt.  Too many of the songs didn’t really seem to have a lot to say for themselves so I, as I have done once before, placed The Proclaimers on the back burner (Slow burner?).

But before this gig, I decided a brief visit to eBay was required to allowed me to get to know the band’s three releases since:  Life With You, Notes & Rhymes and the new ’un Like Comedy.

Life With You, released in 2007, proved to be a strong return to form after Restless Soul.  The collection opened with the impressively rowdy title track, which is probably as close as the Lads are ever going to get to recreating the unique magic of I’m Gonna Be.  In Recognition was a deliciously vicious slapping of hypocritical recipients of honours.  I am sure there was a generic aspect to the targets, but I am guessing verses 1-3 were at least inspired by Bono, John Prescott and perhaps Jonathon Ross respectively.

S.O.R.R.Y. would equally have had its target squirming in their seat, had they but the self-awareness to recognise themselves.  Once again, the barb is probably aimed at a group of individuals, but Richard Littlejohn I should imagine would be pretty high up the list.  The well-intended strike at rap-music’s misogynist baggage Here It Comes Again, however, falls short of its mark I feel.

Blood Lying on Snow was another highlight though; a rockabilly tinged paean less to love than to lust, with guitarist Zac Ware allowed to dip a toe in the alien waters of heavy metal for his guitar solo.

The quality control wobbled a bit towards the end of the collection and neither Harness Pain nor The Lover’s Face live long in the memory, and the cover of Wreckless Eric’s Whole Wide World doesn’t really benefit from Craig’s strident vocal style, in my opinion.  The set closes in sombre manner with the singer lying in the darkness questioning his faith – this in stark contrast to the self-confident assertions found in a number of the songs on the Hit the Highway album.

Notes & Rhymes (2009) was an ever better collection, I felt; a more subdued album perhaps with many of the songs piano led.  Love Can Move Mountains was a towering masterpiece, Free Market, with Ware’s ukulele to the fore, a scathing observation on the banking system – the way it fought for deregulation, but once it crashed “held out the begging bowl” for public money.  Socialism rescues Capitalism.

I Know, was one of the band most complex constructions with a disturbingly pessimistic lyric which, perhaps rather controversially, pondered the similarities between UK soldiers and Taliban fighters in Iraq/Afghanistan before, in a brilliant lyrical twist, suggested we as a species have evolved little since our brutal primitive forebears first learned to use weapons to knock seven bells out of each other.  Perhaps Kubrick’s monolith has a lot to answer for.

Coming up to date, the new release Like Comedy completes what appears from this standpoint in time, a particularly powerful trilogy of work, of which the twins can be proud.  Whatever You’ve Got is another in the long line of rumbustuous album openers, this tune featuring the puzzling lyric:

“We’ve spoken the truth for so long, we need lies”

An odd statement from folks known for their often brutally honest observations.

Women and Wine and Wherever You Roam are both welcome additions to the canon of songs written for C&C’s respective children.  But with this set it is the more restrained pieces which shine: Simple Things, There’s and After You’re Gone are quite mesmeric compositions with Craig’s voice sounding as good as it ever has.  I Think That’s What I Believe appears to have the writer (Craig, I assume) finally having lost his faith, perhaps having been exposed to the late great Christopher Hitchins once too often.

It is admittedly many years since I last attended a gig at The Edinburgh Playhouse, yet I do not remember there ever being quite so little leg room as on this evening – I doubt if anyone over the height of five foot would have found sitting even remotely comfortable.  I guess the seating had been arranged in this manner partly to squeeze a few more rows in, but also with the expectation that most folks would end up be standing during the show.  Even so, it did mean one became rather more intimate with individuals squeezing past to get to their seats, than perhaps one would like.

Also, I do not recall ever attending a gig anywhere where there appeared to be so much alcohol flowing.  Now don’t get me wrong, I have no quibble with pre-gig refreshments per se, but there just seemed to be staff punting it everywhere.

Just inside the door there was a stall peddling wine and beer, and even the usherettes had their choc-ice trays loaded with booze.  I saw them holding up bottles in a manner which reminded me of those individuals who stand at the roadside during the London Marathon offering water to help the runners to stave off the effect of dehydration.  Only here they appeared to warning folks against the perils of sobriety.

That being said there was never the remotest hint of any alcohol fueled nastiness, other than the irritating stream (pun intended) of cross-legged clowns wandering to the loos throughout out the set.  Did it never occur to these people that if you pour a gallon of fluid in one end of your body in the hour before a gig, it would inevitably be looking for a way out during the concert?

We only caught the last four songs of support act Blueflint, and they were pleasant enough.  I enjoyed the work of fiddler Danny Hart, although in truth bluegrass is not quite my drug of choice.

The Proclaimers began their set with four wonderfully raucous tunes; me being particularly pleased to finally hear Shout Shout played live.  Letter From America came along next, this one getting everyone to their feet for a rare old sing-along.
There were two real treats for me in the set: There’s and Shadows Fall.  These are a brace of C&C’s rather more introspective compositions; ones which can easily get lost in the melee of the biggies, and it was a privilege to hear them live: Craig and Charlie’s harmonies during the latter were just chilling.

The experience was tarnished a just a tad however, as we had unfortunately found ourselves seated directly in front of Mr. and Mrs. Trainspotting and their tribe of mutant inbred piglets, who chose to set up an incessant chatter throughout the song.  Had I been less of a wimp, I may have said something, but I felt the possibility of there being some tooled-up Begbie type in the litter was perhaps rather high.

Following Shadows came Sunshine on Leith, after which the tempo was cranked up through Sky Takes the Soul, I Met You and There’s a Touch towards the inevitable climax of I’m Gonna Be.  It amuses me that even after all this time, some of the audience singing along still get the first "Da Da Da-da" in the wrong place.

The encores were Life With You, Charlie’s poignant elegy to his father Act of Remembrance and The Joyful Kilmarnock Blues.  I would have preferred Oh Jean to finish the evening, as I have never felt this band arrangement of Kilmarnock quite hits the mark, but that was a minor quibble.

Reading this back I acknowledge I have indulged in a bit of Grumpy Old Goat moaning in these scribbles, but overall this was a wonderful, wonderful evening.  Indeed, the best I have ever seen The Proclaimers.

Whatever You’ve Got
Notes and Rhymes
Hate My Love
Shout Shout
Letter from America
Spinning Around in the Air
The Thought of You
Let’s Get Married
In Recognition
Cap in Hand
There’s
Sean
I’m On My Way
Shadows Fall
Sunshine on Leith
Sky Takes the Soul
What Makes You Cry
I Met You
There’s a Touch
I’m Gonna Be
Encores
Life With You
Act of Remembrance
The Joyful Kilmarnock Blues
Posted by Ian38018 at 06:42