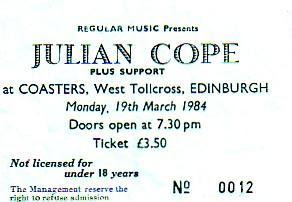 Julian Cope’s first solo album was named World Shut Your Mouth – the apparent bravado of the title perhaps not truly reflecting Cope’s state of mind at this point in his life, following The Teardrop Explodes’ fractious implosion.

Cope, back at the time of the album’s release in 1984, was a long way from evolving into his present Arch-Drude persona, and was regarded by most folks as just the pretty-boy frontman for a not terribly successful New Romantic pop group.  Consequently, sales for WSYM could best be described as indifferent, which was a shame as it really was (and remains) a beguiling collection.

The opener Bandy’s First Jump (who the hell was Bandy?) rattled along powered by some crashing chord work by guitarist/producer Steven Lovell.   Much of the lyric was typical Cope nonsensical wordplay, but anyone who has lived with depression (either their own, or that of someone close) would easily relate to the line:

“Face the day, and start to climb”.

Indeed it is difficult to overestimate the contribution made by St John to this album, her input enriching both Lunatic and Fire Pistol and Quizmaster immensely.

There were also a couple of excellent singles released from the album, neither of which charted: the ever so slightly Oedipal Sunshine Playroom, and the rather more poppy Greatness and Perfection.

And it was this latter release with which Julian opened his gig at Edinburgh Coasters, to general acclaim.  Immediately thereafter though things became rather more challenging, as he followed this up with Pussyface (the least accessible track on WSYM), a couple of as yet unreleased pieces plus the first in what would be a selection of arguably wilfully obscure cover versions.  Namely A Question of Temperature and I Must Be Mad by Sixties No-Hit Wonders The Balloon Farm and The Craig respectively, (and No, I am not making these names up!).

A third cover was Pere Ubu’s Non Alignment Pact – I had at least heard of this one, but it was hardly what could be described as mainstream.

A couple of Teardrop tunes were aired to perhaps smooth the passage of all the unfamiliar stuff: Bouncing Babies and The Culture Bunker, which was more than fine by me.

The final encore saw one of the earliest renditions of what would become a staple at future Cope live sets: Reynard the Fox.  The performance was a real tour-de force, showcasing an impressive array of time signature changes held together by some fine drumming by Chris Whitten.  The song, perhaps unfortunately, degenerated into one of Cope’s slightly embarrassing rambling monologues, but was nevertheless an impressive show-stopper.