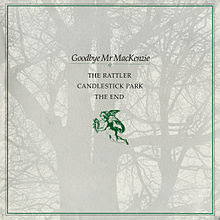 It is fairly safe to say my hometown Bathgate has never really been a hotbed of Rock’n’Roll.  There is a rather fine American singer-songwriter by the name of Chris Bathgate, but I guess he probably doesn’t count.

The Proclaimers famously name-checked the town in Letter from America and at the time I thought that was quite neat.  But, being a regular visitor to watch my local football team Bathgate Thistle, I soon became bored with listening to visiting half-wits bellowing “Bathgate No More!” as my team found themselves on the wrong end of another pasting.

Which sort of just leaves Goodbye Mr Mackenzie.  This band was formed from amongst a group of YTS students attending a music industry course at Bathgate Technical College in 1984.  As part of the course, the students were invited to write, record and release their own single to allow them, one assumes, an insight into how the process worked in real life.

Afterwards the students persevered with this Rock’n’Roll thing, and in 1986 released their first single proper: the really quite wonderful The Rattler.  A guitar driven rocker featuring a catchy little keyboard riff, the single was pretty much ignored outside of Scotland.  And even up here, I should imagine the use of the word “beaver” in the lyric would not have helped it onto many radio stations playlists.

There would be little, if any, airplay for the group’s next release either, the powerful Face to Face; it’s frank description of a rape and its aftermath making for uncomfortable listening indeed.

The other two songs on the 12” disc were equally unforgettable: the odd almost whimsical Secrets, and the lengthy Good Deeds.  This latter composition was a relentless drum driven tale of madness, jealousy and murder, which builds musical tension towards a quite frightening conclusion.

The band, regretfully, would never scale those peaks again.

However, Capitol records had been taking notice, even if most of the rest of the UK had not, and in 1989 the band released their debut album Good Deeds and Dirty Rags.

The Mackenzie’s sound had been filled out (in more ways than one) by the addition of former Exploited guitarist Big Jim Duncan by this point, and although the album is generally fine, given what had gone before and my subsequent high expectations, the affair was a bit of an anti-climax.

“Eating them beaver” was replaced by “eating them, cheating them” on the re-recorded version of The Rattler, which one assumes Radio 1 found rather more palatable (although Martin Metcalfe’s vocal does at times sound like “Eating them cheese-dips”.   Released as a single this version did ease into the top 40.  Just.

Open Your Arms, Dust and Wake It Up were all excellent, but too many of the songs just failed to stand up to repeated listening.  And the re-recording of Good Deeds was just appalling.

The album was still unreleased (unrecorded even, probably) when this gig took place, at the Glasgow Pavilion, so most of the set was new to me.  Support act were a gang of thudding plodders called Thieves, I seem to recall.

The Mackenzies opened proceedings with one I was unfamiliar with, before following on with a rather rushed version of Secrets.  The Rattler was, rattled out as an encore, or at least late in the set, but there was no place for Good Deeds, rather disappointingly.

The sprightly Green on Red I remember being aired, along with pointedly provocative Strangle.  As my companion stated: “What is the point in playing a song with a lyric of ‘Strangle your animal, Strangle your pet’, if you are going to apologise for it afterwards?”

As enjoyable as this gig had been, I was particularly disappointed with the album, and I pretty much lost interest in the band after this.  Although I do recall seeing Metcalf and co-singer Shirley Manson getting married in one of their videos sometime later.  In fact, I believe the band persevered until as late as 1996.

When Goodbye Mr Mackenzie finally called it a day it was not the band’s most talented member who went on to find fame and riches………..but, somewhat inevitably, the prettiest.