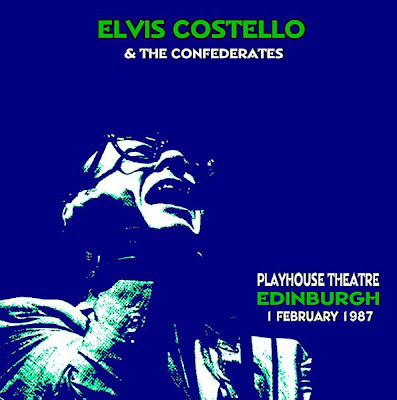 I sort of fell in love with Elvis Costello gradually.  During the early years of his career I didn’t really have much time for him.  In fact he irked me inordinately, for reasons I have never quite been able to ascertain.  That my Brother, when we were still sharing a bedroom at home, would play Radio Sweetheart ad nauseum was possibly part of it, but cannot be all.

The thaw began when I first heard the Almost Blue album – ironically a collection which is least representative of the man’s musical output up to that point.  That this, with hindsight rather staid collection of hoary old C&W standards, impressed me so much was probably in no small part due to my unfamiliarity with the genre.

Back then to us Scots, Country Music generally meant Sydney Devine, so it is perhaps not surprising any moderately competent C&W would appear a major step up in quality.

But it was Imperial Bedroom which had me tumbling head over heels.  With all those gazillions of witty words crammed onto the lyric sheet, and the extensive range of musical styles contained therein, it really was an enticing collection.

Beyond Belief and Man Out Of Time both showcased Costello’s skills as a wordsmith to the full, whilst the melodic You Little Fool still delights with that harpsichord tinkling away in the background.

Rarely outside of a Beatles album has an orchestra been used to such telling effect than on And in Every Home.  Add to these, such quality compositions as Shabby Doll, The Long Honeymoon and Tears Before Bedtime, and the album really spoils the listener.

I am sure most Costello fans would disagree, but I always felt his career (Shipbuilding, apart) entered a slow downward slide from this point on.

I had hoped to see the man in late 1986, during the Spinning Songbook tour, but could not make it.  So was pleasantly surprised to note he planned a quick return to Edinburgh – a very quick return, within some two months in fact.  But this gig was billed not as Elvis Costello & The Attractions, but as The Costello Show – which turned out to be a totally different proposition altogether.

The main aim for this particular set of dates appeared to be to re-introduce the world to the songs on the King of America album, which Costello had released a year before.

A smattering of his hits was played, but the majority of the rest of the whopping 34 song set consisted of cover versions: some familiar (Buddy Holly’s True Love Ways and Mose Allison’s Your Mind is on Vacation), but most almost wilfully less so.  Oddly his most recent album, Blood and Chocolate was pretty much ignored.

The man had greeted us all with a “Happy Chinese New Year”, before opening with an acoustic rendition of Oliver’s Army, then the wonderful Stranger in the House.  And from there we involuntarily set out on a two hour mystery tour.

I am sure Costello had a whale of a time playing these tunes, but for the rather less committed fan like myself (who had not actually heard the King of America album at this point), the set was quite hard work: just a series of one unfamiliar song after another.

Midway through proceedings Costello permitted himself a few solo numbers, and I have to say whilst his voice is quite one of the most recognisable around, for all its charm it does not often lend itself to solo songs.

Thus it was, during Little Palaces that Wife (never known for her patience) determined she had had enough, and took the decision that an hour sitting in the car listening to the radio was preferable to another 60 minutes of Costello's plaintive bleating.  I could sympathise totally, and recall Poisoned Rose and Shipbuilding both being particularly painful to sit through.

All she missed really was more of the same:  the songs from King of America came thick and fast (eleven in total during the evening), interspersed with further alien covers.  Where the fuck were the hit singles??

The first encore was I Want You – at least I knew that one, even if it could by no stretch of the imagination be called a hit.  But even during the encores we could not escape the King of America/obscure covers motif of the gig, and I began to get more than a little pissed off with the man, soon envying Wife sitting snug in the car wolfing down her baked potato.

And I have to say when the band failed to reappear for what would have been a fifth encore after Sleep of the Just, I was more than just a little relieved to be able to go home.

Encores
I Want You

Don't Let Me Be Misunderstood
Your Mind is on Vacation

That's How You Got Killed Before
Payday
Sleep of The Just