Orchestral Manoeuvres in the Dark - Edinburgh 1980 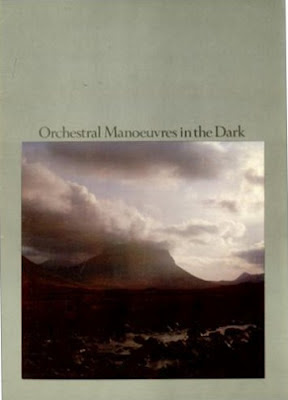 It was Wife-to-Be who introduced me to Orchestral Manoeuvres in the Dark (or OMD, as they were soon to become and shall ever after be referred to in these scribbles).  Never a huge record buyer, WTB had nevertheless taken the time to seek out and purchase a rather obscure single she had heard played on the radio.  An energetic electro-pop thing, with silly lyrics which burbled on about how wonderful a thing electricity is.  It was a pleasant enough tune, although I preferred the b side: a swirling synthesiser, minor key tale of lost opportunities titled Almost.  I just filed the band as one-single (not even hit) wonders, but WTB kept the flag flying, playing the disc to anyone who would listen.

And lo and behold, upon returning from a holiday in we discovered OMD had only gone and had themselves a hit single in our absence: Messages.  This resulted in the immediate purchase of the band’s self-titled debut album; a quite intriguing collection of electronic pop tunes written by a couple of blokes (Paul Humphreys & Andy McCluskey) who had clearly spent a lot of their teenage years listening to Kraftwerk.  Although quite what the fuck they were attempting to achieve with the track Dancing, I have no idea.

Anyway the upshot of all this was that WTB regarded OMD as “her” group, and even claimed to have (in some small way) been responsible for their success, through her unstinting support.  She was therefore, as you may imagine, more that a touch miffed, when I informed her a workmate S had purchased a ticket for me (and not she), for the band’s upcoming gig.

She has never quite forgiven me for this and, indeed, has been known to cast it up twenty/thirty years later as a prime example of my general thoughtlessness and insensitivity.  Cannot argue, I suppose.

On the evening the support act were a bunch called Fatal Charm, who entertained us all with their brand of spiky and abrasive guitar driven pop, rendered perhaps a touch less spiky and abrasive by the mellifluous tones of singer Sarah Simmonds.  But ‘twas forgettable stuff, really.

As the OMD set progressed the stark difference between the new songs and those on the debut became apparent.  The new disc Organisation visited much darker places and despite the pastoral pic on the cover, the music contained within was introspective, industrial stuff.  Second Thought, VCL XI, Statues (to Ian Curtis) and the Gallic-tinged Emotion & Heart were all highlights, with the album culminating in the broodingly oppressive Stanlow.

Some thirty years on, the collection remains as fresh and relevant now as it did back then, and whenever I find myself being subsumed by the forced optimism, artificial sunlight and general joie de vivre of contemporary living, I take myself off to a darkened room (usually cradling a Chilean merlot), and indulge myself in the whole album right through.  I like to think it helps to restore my natural Grumpy Old Man equilibrium.

Songs from Organisation dominated the second half of the concert, and the set proper closed with, perhaps inevitably, Enola Gay - at that point rattling around the top ten.  And I think we all realised, the band included, that this song would change their lives forever.

The single has become so familiar over the years, that it is perhaps difficult to appreciate now how innovative it sounded back in 1980.  The lyric, and indeed the subject matter as a whole, came in for a bit of a kicking at the time, but I always felt the lyrical ambiguity was rather clever; the way the song switches between being directed at Enola Gay the B-29 bomber, and Enola Gay Tibbets (the pilot’s Mom).

When the band exited the stage, Humphreys left his sequencer running, repeating the opening few bars of the song over and over again.  I assumed this was intended, but was never quite sure, and it did set me to wondering just how much of the music we had just enjoyed was actually being produced live.

After the obligatory few minutes, the band returned to the stage, Humphreys threw a switch on the synth, and the Enola Gay bit stopped and the band moved into their rather self-conscious version of Waiting For The Man.

I have heard so many Velvet Underground covers over the years – almost all universally naff.  David Bowie, Simple Minds, Cowboy Junkies, Japan, Strawberry Switchblade, Brian Ferry have all attempted (and made an arse of) Velvet covers.  And, regretfully, here were OMD joining that list of illustrious failures.

IMO, the only folks to have made a decent fist of things are Paul Quinn & Edwyn Collins, with their version of Pale Blue Eyes.  But I suppose even this recording will have its critics out there.

The show closed with further renditions of Enola Gay and, my personal fave Julia’s Song, and we all wended home realising this had been one of those right time, right place gigs.  The evening had been bloody marvellous – although I had sufficient gumption to tell WTB when I next saw her, “Oh, it was OK”.