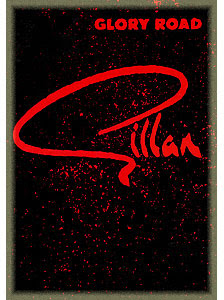 I probably would not have bothered going along to this one had not D, my Metal-Loving Mate not been so keen.  He had accompanied me to the Gillan gig a few months earlier, after which he developed a (and I can think of no other word for it) crush on bassist John McCoy.  He had purchased a little badge featuring a cartoon image of the man, which he would wear everywhere.  And would extol the bassist’s virtues to anyone who would listen…..ad nauseum, given the opportunity.  Yes, it’s fairly safe to say it was love.  D had also fallen for the Mr Universe album, although I was a tad more reticent

Despite this fact I, like many other many folks I suppose, was seduced into purchasing the follow up Glory Road by the enticement of a second album thrown in gratis.  I, perhaps a touch naively, hoped this free disc may be the (by now, becoming legendary) Japanese Album, but regretfully not.  For Gillan Fans Only, was naught but a selection of out-takes and b sides.

The album began with a brace of acceptable pieces before rapidly careering downhill, and even Bernie Torme’s screeching guitar was soon drowned out by the sound of fervent barrel-scraping.

The Glory Road album itself was little better.  McCoy and Torme had been given the opportunity to write some of the music, with the result side A of the record was almost over before we were treated to a decent song – even then it was Sleeping on the Job, written two years earlier.  ’ compositions, generally a guarantee of quality were, I felt, equally substandard.

Both Nervous and Running, White Faced City Boy sounded as if Towns had scribbled them off during a coffee break from some TV work.

The one exception was On The Rocks; Towns’ synth riffing to great effect, although the gumby lyrics of the “Hold tight, hold tight…….” section did detract from what was otherwise an impressive ensemble piece.

At the gig we had two support acts to sit through before the main attraction: Anthrax and White Spirit.  The former passed me by barely registering an iota on my consciousness, whilst the latter at least boasted Janick Gers, an axe-man with a memorably odd loping guitar playing action.

Gillan were as professional and polished as ever but, with hindsight, this was probably one Gillan gig too far for me.  I knew the songs too well, had witnessed John McCoy’s dayglo painted head routine once too often, and I just found the head-banging routines going on around me a hackneyed cliché.

There was a cartoon/panto aspect to the whole business, and I could not quite get out of my head the impression that Ian Gillan himself was just laughing at us all – laughing all the way to the bank.

Second Sight
Unchain Your Brain
Are You Sure?
Mr Universe
If You Believe Me
Trouble
No Easy Way
On The Rocks
Vengeance
Sleeping On The Job

Encore
Smoke On The Water