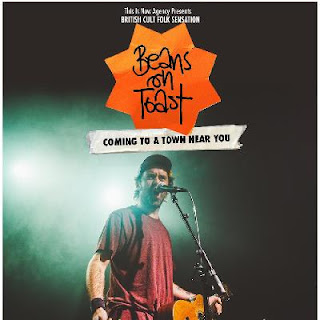 If I ever required additional evidence that Glasgow gigs are generally way more fun than Edinburgh ones, this evening most assuredly provided it.  For I cannot imagine Jay (Beans on Toast) McAllister has ever had to work quite so hard to get through to an audience, as he had with this gig's rude and self-absorbed rabble.

The evening began well enough.  After a short delay caused by lead singer John McAlinden getting lost driving to the venue, the first support act Colonel Mustard and the Dijon 5 (or some of them) performed a stripped-back acoustic set.  Much of the band's trademark on-stage mayhem and madness was inevitably missing with this setup, but McAlinden's charisma soon won over any waverers amongst the attendees.  And anyone who hates golf is just fine by me.


But then arrived Lord Tensheds with his jarring juxtaposition of sumptuous keyboards and Tom Waits howl....and the fucking chattering started.  That maddening thrum of background yakketing which must be the bane of musicians' lives these days.  (It certainly is of mine)

And, of course, as more folks started telling their friends all those oh-so-important, cannot-wait snippets of their life, they had to each become louder and louder to ensure their neighbour could hear them over the competing voices.  To the extent poor Tensheds' more sensitive compositions – there was an intriguing one relating a bridge in Halifax favoured by young suicides, which I particularly wished to hear – were drowned out by the conversations of twittering clowns, who plainly viewed the performer as little more than ambient background to their evening.

It really does get me so angry.

I have to say though, I found Tensheds' gritty gargling-with-gravel vocals (he, at times, made Lemmy sound like Aled Jones), a touch distracting from his music, which veered from beautiful electric piano work to throbbing, pulsing electro-pop.  I should have been happy with set of instrumentals, from the (we learned) Royal Academy of Music trained chap. 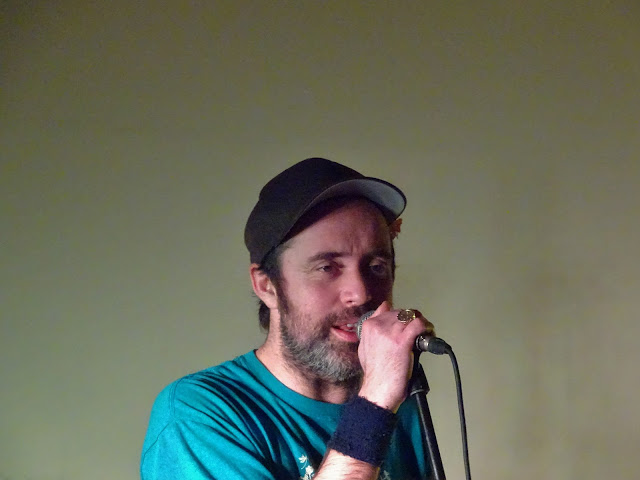 The majority of the gabblers, to be fair, did shut up once Beans on Toast took to the stage.  I say the majority, for there still remained throughout, particularly between songs, an insidious racket which reminded me of nothing so much as the sounds I used to hear from our local primary school during break times.  Thus did Jay, I felt, at times struggle to connect with these bunch of idiots, who were clearly simply intent on their own enjoyment.

As if that was not enough Daughter and I had, in front of us, a group of half-a dozen or so folks clearly off their heads on some chemical or other, who insisted on barging around into all and sundry.  “Look at Us”, they appeared to be proclaiming, “We are having all the fun”.  Jay eventually had to briefly break off from one song to enquire if the most wasted of the clots was OK.

We also had an object thrown onto the stage, which Jay attempted to make light of.  But clearly this was not something he was used to.  And I lost count of the number of occasions, after singing a particularly cogent line, Jay noted in bafflement: “Well, that usually gets a cheer”.

His spontaneous decision to compose/perform on the hoof a short ditty he titled Scotland, I love You was made, I am sure, more in desperation than anything else.

I felt BoT could easily and, indeed, justifiably thrown a bit of a moodie here – I have seen others do so in not dissimilar circumstances.  But to his eternal credit, he manfully ploughed on.  His professionalism finally making a qualified success of what must have been an, at best challenging, and at worst downright unpleasant evening for the man.

All this is stark contrast to the Beans on Toast gig I had attended at The Stereo in Glasgow just over a year ago.  That had been just one long good-natured party, with the more sensitive tunes being listened to in rapt silence.  Which is how things should be, in my opinion.

Come back to Caledonia soon, Jay.  Just not to Edinburgh.

Money For War
World Gone Crazy
England, I Love You
Extinction No 6
Watching the World Go Round
Logic Bomb
M.D.M.Amazing
The War on War
Take Your Shit Home With You
A Whole Lot of Loving
My New Number One (first verse only, as Jay forgot the rest)
I Can Be That Tree
Harry in a Helicopter
Robin Hood Costume
Down the Pub
Taylor Swift
Rich vs Poor
Saying Thank You to Robots
I'm Home When You Hold Me
Lost Poetry Department
Things
On & On
The Chicken Song
Nanny Mac
Scotland, I Love You (written on the spot)
Another Year
The Price of Rice

The Old Dr Bell's Baths was, indeed, at one time a public baths.  But the place was closed in June 2009, when the council discovered that the fittings on the skylights above the pool had deteriorated so badly they could fall into the water!

In 2019, the fully refurbished building re-opened primarily as a wedding venue - hence the whitewashed walls and ceilings.  Whether it has any long-term future as a gig venue, time will tell.  I rather doubt it.