Sometimes you do not have to travel to see your favourite bands.....sometimes they come to you.  Well, sort of.  Wife and I were on a short trip to Vienna taking in the sights and the innumerable Christmas Markets, when I noted a poster stating KC were in town.  So I felt a few hours in the company of Robert and the boys would act as a pleasing counterbalance to the Mozart concert and Verdi ballet we had lined up for the other evenings.

The band are now over two years into their “comeback” Elements of King Crimson Tour, and in true Crim fashion set lists have evolved and developed  significantly over the period.  I had noted that a few more gems from the early seventies KC vaults had been polished up for presentation of late.  Peace-an End and Fracture were both being given occasional airings on this leg of the tour.  But neither, regrettably, this evening.

What we did get was Dawn Song (a snippet from the lengthy Lizard track), plus Cirkus from the same album.  This latter, relying on a bizarre two note see-sawing thing to drive it along, is full of all manner of musical delights on vinyl: Fripp's manic acoustic guitar picking, the mellotron-produced Mantovani Strings interlude, and a dancing alto sax solo by Mel Collins.

None of which the band, it has to be said, made any serious attempt to re-create this evening; the rendition appearing just a touch pedestrian as a consequence.  But it was fun to hear the old friend once more.

The band's extended improv in the middle of Easy Money did dribble on for perhaps a couple of minutes too long.  As did the The Letters' crime of passion interlude, but that was all fine – very Crimson.  I was delighted to finally taste Larks' Tongues in Aspic, Part Two – which I had failed to do at any of my quartet of KC gigs last year.  The more I hear this tune, the more I feel Mr. Fripp was (ahem) heavily influenced by Stravinsky's Rite of Spring.

The second half of the gig featured a deal of more-recent material (relatively speaking), the standouts being the doom-laden metal-fest that is Level Five, and the fiendishly complex The ConstruKction of Light (guitars in 5/4, over drums in 5/8, at one point!).

The climax to Starless is still a fucking train-smash though.

On the up side this was undoubtedly the finest I had heard Fripp play, and he even indulged us/himself with a couple of lengthy solos.  When he performs that unique Frippertronics sound - as he did on A Scarcity of Miracles - he truly is peerless as a guitarist I feel.

His work was also crystal clear and well to the fore of the mix (unlike last year) and when, at the end of the gig, I mentioned this improvement to the sound engineer whom I had ended up sitting close to, he beamed like a schoolboy. 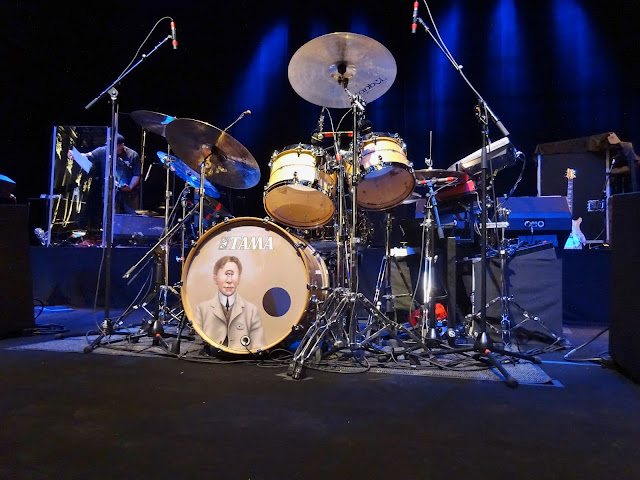