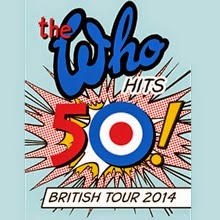 I have I suppose to preface this entry by admitting to never having been much of a fan of The Who.  I never disliked them; indeed I found most if not quite all of their singles to represent superior pop and/or rock music.  But it was just whenever I went digging into their albums, I invariably came away disappointed.

And I include in this summation that loaves and fishes miracle Tommy, whereby Pete Townshend somehow succeeded in feeding four sides of vinyl with just half-a dozen decent songs.

So there was clearly an element of box-ticking going on here; me realizing this would probably represent my last ever opportunity to see the outfit once dubbed “The Greatest Live Rock ‘n’ Roll Band in the World.

Proceedings kicked off promisingly enough with a sphincter-tight rendition of I Can’t Explain, but thereafter Roger Daltrey’s voice appeared do undergo a touch of the wobbles over the next few songs.  By Who Are You things were on an even-keel once more, and the quality just kept on coming: Join Together, Behind Blue Eyes, Squeeze Box, The Seeker.

During 5:15 the behind-stage screen showed live footage of John Entwistle, and through the magic of 21st Century technology, the Ox succeeded in contributing a bass guitar solo to the performance.  Similarly Bell Boy saw Keith Moon contributing vocals.  It was in a way both moving yet somehow rather creepy.

Proceedings dipped a touch after this as the band, clearly attempting to touch as many career bases as possible, served up a pair of little-known songs from the 1982 album It’s Hard: Eminence Front and Cry if You Want.

I actually felt the former song with its electronic feel to be a welcome contrast to the crashing guitar chord format stuff, but Daltrey’s attempt to perform the vocal tongue-twisters on the latter resulted in him collapsing in a heap of laughing expletives; even with the lyrics clearly taped to the floor in front of him.  Perhaps it was his eyesight rather than his memory where the problem lay.

A short Tommy section had the crowd in messianic mode but, apart from the jagged guitar work on Sparks which I have always enjoyed, I should have been happy to see this section go.  The main-set closers Baba O’Reilly and Won’t Get Fooled Again though reminded everyone, should they need it, just what all the fuss is about.  This latter composition truly is one of the finest moments in 20th Century rock music.

I was surprised at the numbers of folks who decided not to wait for any encore, streaming out as soon as the band had left the stage, although I am aware that getting away from the Hydro can be a bit of a nightmare.  Those who did leave missed nothing of note however, as the band chose to encore with some dull dirge I had not heard before, and would not be sad if I never hear again.  (I later learned it to be Naked Eye).

So, box duly ticked, gig buddy and I made our way back to the double-yellow lines where I had parked the car.  No parking ticket = Result.  And we were halfway back to Fife before I am sure some folks had succeeded in getting out of the Hydro car-park.

Setlist
I Can't Explain
Substitute
The Kids Are Alright
I Can See for Miles
Who Are You
Long Live Rock
A Quick One (While He's Away)
Slip Kid
Join Together
Behind Blue Eyes
Squeeze Box
The Seeker
5:15
Bell Boy
Love, Reign O'er Me
Eminence Front
Cry If You Want
Amazing Journey
Sparks
Pinball Wizard
See Me, Feel Me
Magic Bus
Baba O'Riley
Won't Get Fooled Again