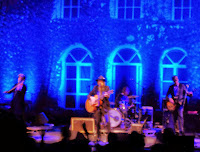 Fisherman’s Blues Revisited, this short tour of the and was promoted as.  Although with Mike Scott being Mike Scott, the business was always going to involve a whole lot more than just a note for note rendition of The Waterboys’ 1988 album of that name.

A fair wodge of the collection was performed, as one might expect, although Scott’s paean to past loves And a Bang On The Ear, and my fave The Stolen Child were both conspicuous by their absence. (Booo)

For the tour Scott had brought along three other musicians from the original recordings (Steve Wickham, Anthony Thistlethwaite and Trevor Hutchinson), and the gig was played against a backdrop pic of the house from the album cover; which forded the band a delightful visual joke at the end of the evening (which I shall not give away).  I should have loved Sharon Shannon to have been there too – but perhaps that was just greed.

A further collection of songs from the original sessions had surfaced around a decade ago and had been released under the title of Too Close to Heaven/Fisherman’s Blues Part 2.  I noted Scott had recently gone the whole hog, and that there was now available a whopping 6 CD collection of recordings from the FB sessions.

And it was the performed songs from this latter collection which proved to be amongst the most intriguing of the evening.  The brooding Tenderfootin' was a real highlight, whilst the fine Too Close to Heaven would not have sounded out of place on Van Morrison’s Into The Music album, I felt.  But it was the band’s take on Ray Charles’ Come Live With Me which almost stole the show.

Not everything hit the mark, however: the stripped-bare rendition of Don’t Bang The Drum was a bit of a chore to sit through, and We Will Not Be Lovers was frankly an over-long mess.  But all was forgiven when Scott strummed the intro to Fisherman’s Blues, and I closed my eyes to swim and drown in Wickham’s sublime fiddle work.  I don’t think I shall ever tire of hearing this song.

But, for me anyway, the high water mark was reached with a spine-chilling rendition of Saints and Angels, which Mike dedicated to those who had lost their lives in the Clutha Bar.  And I am not ashamed to say I was doing the dealing with the lump-in-the-throat thing during this one.

Strange Boat
Higher Bound
You in the Sky
A Girl Called Johnny
Girl from the
Stranger To Me
When Ye Go Away
Too Close To Heaven
Tenderfootin’
When Will We Be Married?
Come Live with Me
The Raggle Taggle Gypsy
We Will Not Be Lovers
I’m So Lonesome I Could Cry
Don’t Bang The Drum
Sweet Thing/Blackbird
Fisherman’s Blues

Encores
Dunford’s Fancy
The Whole of the Moon

How Long Will I Love You
On My Way to Heaven