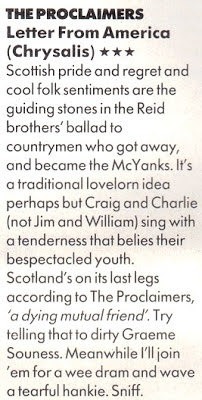 Given the number of people I have encountered over the years who claimed to have seen The Proclaimers’ appearance on The Tube back in early 1987, statistical extrapolation would lead one to believe the Channel 4 TV programme enjoyed an audience of perhaps 10 million.  So let me own up here and now: I missed that seminal moment in The Boys’ career.  Indeed, only managed to witness it for the first time some months ago, when some enterprising chap placed a recording on YouTube.

The most striking thing about the footage now, is how normal Craig and Charlie look amongst the gaggle of fancy-dressed “look-at-me-I'm-on-the-telly” attention-seeking halfwits which passed for a studio audience.  Indeed the only thing more bizarre than whatever is on Paula Yates' head is her attempt at a pronunciation of Auchtermuchty.

What still shines through even after all these years, apart from the power of the songs, is Craig and Charlie’s self-confidence and refusal to compromise.  Their passionate rendition of Throw The R Away clearly laying down the message:  “This is Us.  Take Us or leave Us, but don’t expect any concessions on our part”.

This attitude was even more clearly stated in the songs on the debut album This Is The Story, which introduced the world to The Proclaimers’ trademark amalgam of romance, anger, wit and (often brutal) honesty.  Listening to the collection now it still sounds totally fresh, and the complexity of many of the songs all more noteworthy given the whole album is pretty much just two voices accompanied by a single acoustic guitar.

I played the thing almost non-stop for months after it was released, and it holds a particular place in my heart, for it was released around the time my first son arrived.  The little chap was born with an abdominal wall defect and spent all of his short life in hospital.

This Is the Story was an almost constant backdrop to my twice daily trips through to Edinburgh’s Sick Kids Hospital from West Lothian.  The lyrics to Make My Heart Fly appeared at the time particularly apposite, and just hearing the opening  few bars takes me back to those hours spent sitting next to an incubator willing the lad to get better.

This gig took place in July of that year at The Queens Hall in Edinburgh, whilst The Proclaimers were still a duet.  I remember my first impression when they came on stage was of how small and vulnerable they looked, swamped by the huge empty stage.  And, rather strangely, wondering if Charlie ever felt any resentment that as well as singing he also had to write and learn all the guitar parts, whilst his twin just stood and sang.

Although to be fair, Craig did strap on a set of small bongo drums for Throw The R Away, and also gave his harmonica a fair old blow during Burn Your Playhouse Down.

I am reasonably confident the entire debut album was played with Letter From America perhaps given two airings.  What must have been a very early rendition of Oh Jean either closed the show or was one of the encores.  I am fairly sure Sean was performed as well, although I do wonder if I am making this up.  Would he even have been born by July 1987?  The other song which was in the duo’s set around this time is A Train Went Past The Window, but the mists of time have descended.

Upon leaving the show there was no sense of having managed to catch some novelty act during their 15 minutes of fame; I think we all knew we had witnessed the beginning of something rather special.  Which makes it all the more puzzling to me that it was another 14 years before I next saw The Proclaimers live.