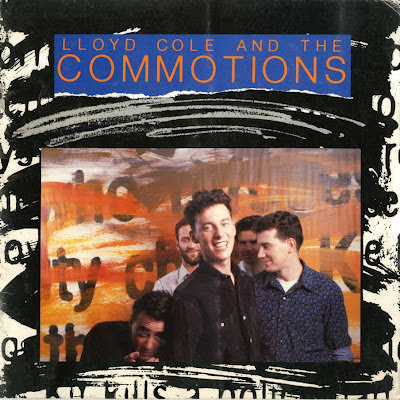 There is an argument for suggesting the band Lloyd Cole & The Commotions enjoyed the perfect career.  Arriving in a blaze of glory with their right-time right-place debut album Rattlesnakes, they followed this up with an only slightly less crucial second, Easy Pieces.

The group chose to go their separate ways in 1989 once the cracks began to show following the difficult third album, before placing a neat full stop after their 80s output with an intelligently compiled Best of.  Even the 2004 short reunion tour somehow appeared appropriate, rather than some Pay-Off-the-Mortgage-Early junket.

This particular gig back in 1985 was the final stop on the band’s 1985 tour promoting the Easy Pieces album, and took place at the recently opened Scottish Exhibition & Conference Centre (SECC) on the banks of the River Clyde.  Although I note on the SECC’s own website the event seems to have been airbrushed out of the venue’s history, with UB40’s appearance early in 1986 being listed as the venue’s “First concert” .

Mind you, rather spookily, like with the other LCatC gig I had seen (which took place, also rather spookily on the same date in 1984), much of the SECC event seems to have been airbrushed from my memory banks as well.

My only clear recollection of the concert is the performance of the dirge-like James, which Lloyd introduced as being “My mother’s least favourite song on the new album”.  The nature of the composition is perhaps appropriate as my defining memory of the gig, as the SECC hall used was naught but a soulless cavernous warehouse of place, with poor acoustics and what little atmosphere created floating off toward the distant ceiling.

I really hate gigs at the SECC, and have often asserted that if a fraction of the money spent on creating this glorified aircraft hangar could have been invested in a refurb of The Apollo, what a rather more Wonderful World we would presently be living in.