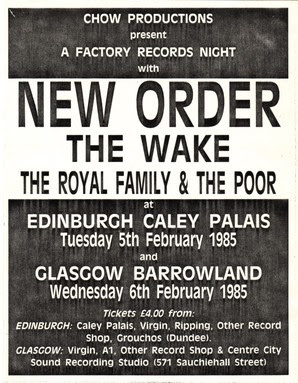 The whole Joy Division thing somehow sort of passed me by, and I believe the first time I even became aware of the band was when vocalist Ian Curtis’s suicide was reported in the music press.  The first album I heard (I think) was the posthumously released Still – a double disc effort, one disc studio and the other live.  Much of the studio disc I just found unlistenable, full of recordings which probably would have stayed in the rejected bin had Curtis not checked out when he did.  There were a couple of nuggets of quality to be dug out (Something Must Break, Dead Souls), if one had the patience to wade through the dross, but much of the collection was redolent of morbid barrel-scraping.

The compositions on the live disc were clearly a cut above, but many were lost in what seemed almost wilfully poor recording quality, none more so than Decades which sounded as if it had been taped on a portable cassette machine badly in need of new batteries.

There was, however, one real standout: Ceremony – although even here Curtis’s mike appeared to be have been malfunctioning for the first half of the song.  Either that or he was guilty of attempting to sing whilst off on one of his bizarre meandering dances.  I, at the time just assumed this was an obscure little gem which would remain forever buried in the depths of the Joy Division back catalogue.

Imagine my delight then when some months later, whilst browsing in a record shop in Falkirk, I was treated to a powerfully crisp version of the song blaring out over the in-shop speakers.  A swift investigation led to the discovery this recording was by a band called New Order who consisted, of course, of the remaining three members of Joy Division: Barney Sumner, Peter Hook and Stephen Morris.  In choosing their new band’s name they had, rather predictably, chosen to continue their Third Reich leitmotif.  Any publicity is good publicity after all.

The band’s debut album Movement was hard work, but then along came the much more accessible Temptation: a relentless chugging piece with a neat little nod in the direction of Giorgio Moroder by new band member Gillian Gilbert.  The 12” version remains the band’s finest hour (or 9 mins) in my opinion.

1983 brought both the Power, Corruption and Lies album and the phenomenon that was Blue Monday, as the band successfully melded elements of Euro-Disco, Krautrock with the New York Club Scene.  Blue Monday probably suffers a touch from over-familiarity these days, but back in 1983 it really felt like a startlingly innovative piece of music.  The band kept one foot on the disco-floor with the follow-up Confusion, which held fans over until the completion of their next album Low Life, and associated UK tour.

I can recall ads from around the time suggesting there would be two support acts:  The Wake and The Royal Family & The Poor.  My recollection is that there was only one at Edinburgh, although which I have no idea.

What I am sure is that the support act pitched up fairly late on in proceedings, and remained on stage quite a time.  The upshot of this was it was nigh on 8:45pm before New Order ambled onstage.  Normally this would not have been a problem, but around this time Edinburgh Council were attempting to stop rock concerts going on beyond 10 pm, and were astringently imposing their silly curfew.

Barney opened proceedings by putting on his best Rab C Nesbitt accent and informing us “This is errrr C’nfusion, mon.”, which indeed it was.  A promising opener, but the band then proceeded to play pretty much the whole of the then unreleased new album Low Life.

Now I think most New Order fans would agree Low Life is a pretty impressive collection, containing some rather-more-than-decent tunes (Subculture, Face Up, Love Vigilantes), but to inflict the whole lot of it on us unknown did seem a bit much.  It rather perversely appeared we were somehow being punished for the doings of the local Council, as if it was our fault for voting ‘em in.

45 minutes into the gig, finally a second familiar song arrived – Age of Consent – which I hoped was to herald a run of three or four biggies to climax the show.  But we were presented with another alien (The Perfect Kiss), after which the band toddled offstage, before encoring with an almost perfunctory run through of Temptation.  And that was it.  “Ever felt cheated?”, as someone once enquired.

OK, so perhaps it was not the band’s fault they had to wind up before 10pm, but someone in their management surely must have been aware of Edinburgh Council’s mad decree, and ensured the evening’s timetable panned out appropriately.

NB - I discovered recently that New Order played the same trick on their Edinburgh audience the following year (1986); on this occasion treating them to 5 new songs out of 10, played in a set lasting well under an hour.  And that to me just seems such a shameful way to treat folks who effectively pay your mortgage for you.