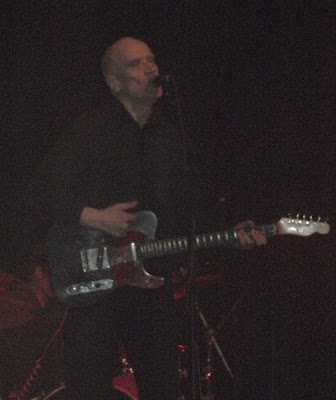 Around 100 years ago, I used to represent my school at badminton.  My mixed doubles partner, whose name I have rather shamefully forgotten, used to play wearing a Dr Feelgood t-shirt.  I had a Yes one, and in the arrogance of youth would think to myself, “Why would she possibly want to spend her money on Dr Feelgood gigs/records/T shirts, when she could buy Yes ones?”  Fortunately I kept these thoughts to myself, as I think she already regarded me as a big enough arse as it was.

It was only a decade later, when I first heard the Stupidity album (originally released in 1976) did I come to realise that by not catching the original Dr Feelgood line-up in concert, I had missed out on something rather special.  Is Stupidity the best ever live album?  If not, it is pretty darned close.

As we all know, Wilko Johnson and Dr Feelgood went their separate ways a couple of years after the release of this album, and it is probably fair to say neither party truly realised the potential of those early days.

So attending this gig was my way of perhaps attempting capture a soupcon of what those early Dr Feelgood gigs may have been like, whilst also admitting to Karen/Fiona/Linda (or whomsoever), that she had been right, and I wrong all those years ago.

I am afraid Brother-in-Law and I missed the support act Virgil & The Accelerators, as we were gassing in the bar quaffing beer'n'wine respectively, not taking our seats until seconds before the main attraction.  Johnson, without any ado ambled onstage with his rhythm section and, after looking genuinely pleased (and even slightly surprised) to see us all, drove straight into All Through The City, from the Feelgood’s debut album.

I, rather stupidly, expected Johnson to somehow replicate Lee Brilleaux’ gargling with gravel vocal, and was initially surprised by how (relatively) high a register Johnson sung in, his voice sounding not unlike John Otway.

But one’s attention was soon drawn to the man’s utterly unique (in my experience, anyway) guitar technique.  Seemingly just randomly slashing away at the strings with the backs of his finger nails he somehow managed to produce this marvellously tight and structured rhythm.  And then, without apparently doing anything different, he suddenly succeeded in playing a lead guitar lick on top of the riff.  How the fuck does anybody do that??  Even Wilko’s own explanation (below) barely clarifies things.

I have to say, there are probably more technically accomplished guitarists around, but for sheer originality and stage presence the man is probably unbeatable.

I was not familiar with many of the songs and, although the majority followed a similar strident R&B format, proccedings never flagged.  Only once did the tempo drop down a touch, with Don’t Let Your Daddy Know - a strolling blues, during which Johnson began to get just a touch too friendly with this guitar, and his John Otway impression veered alarmingly towards Frank Spencer.

Bassist Norman Watt-Roy, the man responsible for the sublime bass-line on Hit Me With Your Rhythm Stick, at times seemed in a world of his own.  Often facing offstage he appeared lost in the entanglement of impossibly complex looking rhythms.  Wherever he was, he seemed to be having a whale of a time.

Highlights were (inevitably) Roxette and the lengthy When I’m Gone, during which Johnson treated us to his machine gun routine, which I thought was just hilarious.  Proceedings wound to a climax with Back in the Night and She Does It Right; the lads returning to encore with a brace of cover versions.  All pretty wonderful entertainment.

My one gripe, and it is a minor one (apart from the fact the gig ended an hour too soon), is that I would have liked a few more words from the man.  I have seen him interviewed on a number of occasions, and he is clearly an articulate and intelligent individual, and a couple of his witty anecdotes would not have gone amiss.  But as I said, a minor gripe.  Perhaps he is a chap who prefers to let his music do the talking.

The drummer, I had not realised until he was introduced, was Dylan Howe - son the Yes guitarist Steve.  And there was sort of neat symmetry there, when I thought back to those T shirts from ’76.

Setlist
All Through The City
If You Want Me, You’ve Got Me
The More I Give
Going Back Home
Roxette
You Shouldn’t Call a Doctor
Dr Dupree
Sneaking Suspicion
When I’m Gone
Don’t Let Your Daddy Know
Back in the Night
She Does it Right