The Police U2 The Beat – Gateshead Festival 1982 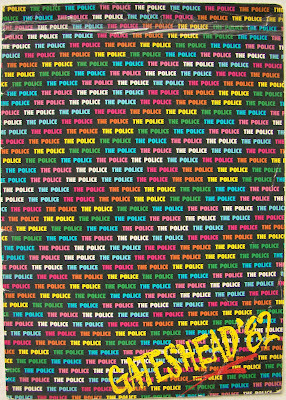 This was the second and (thus far) final “Rock on the ” festival, held at Gateshead International Stadium.  Headliners were The Police, and the day was promoted as a sort of triumphant homecoming for local lad Sting (Gordon Sumner).  Although the band, at this point in their career were certainly a major draw, actual physical world domination would not be achieved until the release of the Synchronicity album the following year.

Myself and two friends shelled out the, what seemed at the time, whopping £7.50 for tickets for the Festival, and drove down on the morning of the gig. 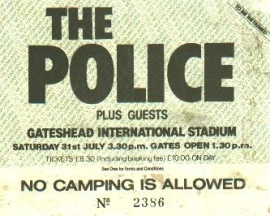 Eschewing the A1, I took the A697 and recall being stopped briefly by a police road-block outside Coldstream, and being asked if we had passed this way the previous day.  It was only later did I realise this had been part of the investigation into the disappearance of a local girl Susan Maxwell, whose body was eventually discovered a couple of weeks later many miles away.

At the time, I thought little of the incident, but over the years my memories of this festival have become inextricably linked with this abduction and murder.  And I am now, rather illogically I admit, unable to think back upon this concert without some small degree of, if not quite guilt, then certainly discomfort.  Discomfort that I had enjoyed such a fun day without a care in the world, whilst only a few miles up the road Susan’s parents were enduring what must have been almost unbearable levels of pain and anxiety.  And quite how any parent ever subsequently succeeds in finding the strength to come to terms with the tragic consequences of such a random visitation of evil, I just cannot fathom.

Anyway – enough of this maudlin stuff.

The Lords of the New Church

The opening act were being touted as some sort of new wave/punk supergroup, boasting American vocalist Stiv Bators, late (in more ways than one) of The Dead Boys, ex-Damned guitarist Brian James plus a rhythm section who had seen action with The Barracudas and Sham 69.  They may have been quite good in their own particular field, but I thought it just pretentious twaddle.  James did his best, but it appeared clear to me that he had merely jettisoned one cartoon/pantomime band for another.  Holy War & are the only songs I recall from the set.

The Gang of Four

The first thing which became apparent once The Gang of Four took to the stage was that, even to someone with a tenuous grasp of arithmetic like myself, there were clearly five of ‘em.  They had brought a friend along – one Eddi Reader, who would later turn up in Fairground Attraction, and whom I would next see performing live in a marquee at the 2008 Aberdour Festival!  Although, to be fair, her contribution at this gig was limited to providing occasional backing vocals and to hitting things.  The other girl in the band, Sara Lee, was and remains quite the most stunningly beautiful thing I have ever seen holding a bass guitar.

The Go4 were actually a pleasant surprise, performing a unique brand of spiky staccato guitar driven funk/punk.  Vocalist Jon King perhaps seemed to be taking the whole business a touch too seriously, whilst some years later I later could not help but wonder if a 10-year old Alex Kapranos had been in the audience alongside me, listening to Andy Gill’s guitar work - and taking copious notes.  Songs played (amongst others) were What We All Want, To Hell With Poverty and I Love a Man in a Uniform – this last named ludicrously banned by the BBC due to the concurrent Falklands War.  I mean how can anyone not love a song containing the line:

“The girls they love to see you shoot”.

These lads were my reason for attending really, but in truth their infectious fusion of ska and pop was woefully out of place at an open air gig like this.  I was disappointed to note Saxa was absent, his replacement being Wesley Magoogan, probably best known for his sax solo on Hazel O’Connor’s Will You.  The band did their best but much of their magic just seemed to get blown away on the chilly Tyneside wind.

Songs I recall played are, in no particular order:
Save it For Later
Ackee 123
Get a Job
Too Nice to Talk To
Mirror in the Bathroom
Ranking Full Stop
Rotating Head
Stand Down Margaret
(and maybe) Doors of Your Heart

I knew little about U2 prior to this concert, other than one of the friends who made the trip had been extolling their virtues for months.  The only song I had heard was Gloria, a rousing almost hymnal piece which succeeded in straddling that fine line between pomposity and sincerity; a line which the band and Bono in particular have walked, with varying degrees of success since.

Their set kicked with the aforementioned Gloria, and whatever else one thought about their music, there was no doubt the charismatic singer had that uncanny ability to gather an audience together into the palm of his hand.  His decision to clamber up the side stage scaffolding during Electric Co to serenade us with a few lines of Send in the Clowns, although a bit silly, is undoubtedly the most vivid memory I have from the whole day.

The songs weren’t shabby either – and even on a first listen I could tell A Day Without Me, I Will follow, Rejoice, and Out of Control were all memorably uplifting compositions.  And I think most folk in the place realised The Police had their work cut out to follow this lot.

Once U2 had finished their set, I remember the three of us discussing whether we would actually stay to watch The Police.  In all honesty, I don’t think there was ever any possibility of us not doing so, but the fact we had the conversation at all reflects perhaps just how infra dig The Police were at the time; certainly in our circle.  Sting
was just at that point beginning his transition from hard-working muso, to irritating wanker.

Musically, I had fond memories of dancing to Roxanne at the disco I used to frequent back in late 1978, long before the song was a hit.  And whilst I would acknowledge I could appreciate the quality of a number of their singles (Every Little thing She Does.., So Lonely, Invisible Sun), much of their album stuff just sounded like weak filler.  Copeland’s Bombs Away was fun, though.

The set proper opened with a rousing version of Message in a Bottle, followed by a further selection of hits, before the set moved into mostly album tracks………and things began to drag more than somewhat.

During Walking on the Moon we were all invited to join with the “Ye yo yo yo yo” mantra; very few folks around us doing so, which appeared to irk Sting inordinately.  We did, eventually, decide to hang around to witness the majority of the band’s set.  And whilst they were clearly very professional and proficient, much of the music just washed over me, and my thoughts began to drift to ensuring we avoided the stadium car park queues.

We decided once the set reached Roxanne it was close enough to the end for us to respectfully take our leave; our exit lit (for it was now dark) by the spotlight shone into the crowd during the “Put on the Red Light” section.

However, I do occasionally wish I had hung around for So Lonely.

Setlist
Voices Inside My Head (intro)
Message in a Bottle
Every Little Thing She Does is Magic
Walking on the Moon
Spirits in the Material World
Hungry For You
When The World is Running Down
The Bed’s Too Big Without you
De do do do, De da da da
Demolition Man
Shadows in the Rain
Driven To Tears
Bring on the Night
One World (Not Three)
Invisible Sun
Roxanne
Don’t Stand So Close to Me
Can’t Stand Losing You
Regatta de Blanc
Be My Girl
So Lonely