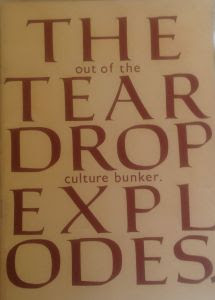 The Teardrop Explodes were formed in in 1978.  They released a trilogy of rather intriguing singles on the local Zoo label, before signing with Mercury in 1980.  Their next release When I Dream grazed the top 50, before the band achieved chart successes with Reward and Treason.

But it was 1981’s Passionate Friend which did it for me – from its crashing intro, impenetrable lyric, utterly delicious horns, and the joyous ba ba ba baba section, through to the outro pinched from The Stones’ As Tears Go By, the song represented perhaps the most perfect 3 ½ minutes in pop history.  Never before had a sitar sounded so good.

It immediately set me out on a quest to collect the band’s complete back catalogue, beginning with the albums Wilder and Kilimanjaro.  The former was an infuriatingly patchy affair –some wonderful songs padded out by evident fillers.  Three of them (Pure Joy Wins Out Again, And the Fighting Takes Over and Falling Down Around Me) all sounded as if they had been written in the studio, with a deadline clock ticking.

Kilimanjaro, however, just took my breath away.  There was a boundless, joyous enthusiasm and optimism throughout the whole set – the optimism of youth for whom anything and everything seems possible.  Ten utterly unique and entrancing songs (only Sleeping Gas let the side down); bonkers lyrics, crystal clear production and not a guitar solo in sight.  Perfect.

The album remains a firm favourite of mine and I know that when, in 20-30 years time, my Kids wheel me off to the Old Folks Home, I shall be clutching a copy in my liver-spotted claws.

So, as you can perhaps imagine, it was a not a difficult decision to decide to go along to this gig at the Edinburgh Playhouse.  In fact half-a-dozen or so of us from work attended with our respective partners – the first in what would become a series of memorable work nights-out over the next few years:  a Rock’n’Roll concert followed by a whopping curry banquet.

Supporting The Teardrop Explodes this evening were three, admittedly rather pretty, ladies who had chosen to go by the name The Ravishing Beauties.  They were keyboard player Nicky Holland, singer Virginia Astley, and the elfin Kate St John whom I next encountered over a decade later playing sax and oboe in Van Morrison’s band.

I recall their music being plaintive, rather simplistic stuff; moderately entertaining for a quarter of an hour or so, but which soon outstayed its welcome.  Although, to be fair, I think the trio’s set would probably have been better suited to a more intimate venue.  I think one of their songs was a Wilfred Owen war poem set to music, but perhaps I just heard them do that on John Peel.

When the Teardops entered, guitarist Troy Tate, without any preamble plink-plinked the opening to Just Like Leila Khaled Said, and we were off.  I admit to having had to do a bit of research at the time to ascertain just who this Leila Khaled person was.  And quite how the former Palestinian hijacker ended up in the same song as Bulgarian environmental artist Christo, and Dickens’ character Barkis I have no idea.  I guess that was just Julian Cope for you.

Next, Gary Dwyer beat-in Seven Views of Jerusalem which, I suppose it could be argued, enjoyed a tenuous link with the aforementioned Ms Khaled, before the horns section introduced Ha, Ha, I’m Drowning - and we were into the radiant, sparkly world of the Kilimanjaro album.

And that really set the pattern for the remainder of the evening: wonderfully joyous nuggets of perfectly perfect pop, intertwined with rather more challenging stuff from the Wilder set.

The recipe was further enriched by the introduction of quite a number of new (or at least unreleased) songs: Log Cabin, Suffocate, Screaming Secrets and Clematis.  I have since been assured that one of Cope’s earliest solo singles Greatness and Perfection was tagged onto the end of the first encore The Culture Bunker, but I have no recollection of it.

What I do recall very clearly is the interminable nonsense of the final encore: Sleeping Gas.  Never a tune I have ever had much time for, the piece degenerated into an embarrassing ten minute Cope rant.  The singer ended up on the floor towards the end burbling on about savaging the audience, and I am sure I was not the only one in the place thinking “Julian!  For Fuck's Sake. Behave yourself”.

I fervently hoped he would stand up, shake his head as if clearing it, and begin to sing “Suddenly, I came to my senses”, and proceedings would close with The Great Dominions.  But no.  He persisted with his Jim Morrison-esque ravings, leaving what had otherwise been a great show to dribble to a decidedly unsatisfactory conclusion.

Nevertheless my, if not quite obsession, but certainly interest in all things Cope persisted for a few years stretching through to his first solo efforts - although my fealty did take a bit of a kicking when I heard the sloppy Fried album.  By which time, Lloyd Cole, Aztec Camera and perhaps more importantly, The Smiths had hove into view.

I dipped into the Cope canon from time to time over the following years (Peggy Suicide, My Nation Underground), where rare gems were to be unearthed, but nothing came close to the wonder that was (and remains) Kilimanjaro.

Falling Down Around Me
Log Cabin
...and The Fighting Takes Over
Passionate Friend
Bouncing Babies
Suffocate
Tiny Children
You Disappear From View
Clematis
Books
Treason
Colours Fly Away
Reward