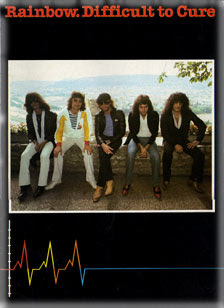 Readers of these scribbles, (if indeed there are any - I do sometimes wonder) will have sussed by now that heavy metal concerts are not quite my cup of meat.  There is just a touch too much of the clichéd ritual about the whole business, and all the throbbing  testosterone I find either intimidating, boring or just plain silly.

So how did end up at Rainbow?  Well it was, of course, at the behest of D - My Metal Pal Who’s (occasionally) Fun To Be With.  I was dismayed, however, to discover the gig was to take place at Ingliston Exhibition Hall – a large metal shed whose acoustics were probably best suited to car auctions, which in fact was what the place was generally used for.

I was not unfamiliar with Rainbow’s musical output.  Like many folks, I had been pleasantly surprised at how melodic and varied were the compositions on their debut album, but I was less impressed by their subsequent efforts.  There was a dull predictability (the epic Stargazer, aside) about many of the songs on both Rainbow Rising and Long Live Rock ‘n’ Roll.  Ritchie Blackmore seeming to have gotten into a composing rut of verse/chorus/verse/chorus/guitar solo/chorus song structure.

I was aware that around 1979, the band had moved towards a more AOR sound, and had enjoyed a clutch of hit singles, mostly from the pen of former Argent guitarist Russ Ballard.  However the band’s musical development had been hindered by Blackmore’s seemingly innate inability to get along with anybody for any sustained period, and by the time of this gig in 1981, Rainbow were onto their 16th band member in six short years.

The support act were a bunch of Australians called Rose Tattoo, fronted by a squat, shaven-headed chap going by the unlikely name of Angry Anderson.  The band’s publicity pic at the time showed all five members with naked arms intertwined around each other, bristling with the inevitable tattoos.

It all looked ever so slightly homoerotic, and I wondered if perhaps the band were targeting the gay subsection of the heavy metal community, which I thought (Rob Halford apart) really must be a small demographic indeed.  That one of the guitarists was called Cocks, may have helped though.

Rainbow’s set opened with a song unfamiliar to me (I later discovered to be Spotlight Kid), but which sounded so similar to Kill The King, that for a full minute or so I thought it actually was this latter tune, such was the level of sound distortion caused by crap acoustics and over amplification.

I can actually recall remarkably little of the rest of the concert – Man on the came along fairly early in the set, by which time the sound engineer had succeeded in improving the sound quality to barely acceptable.

Blackmore did not speak at all if memory serves, leaving the audience interaction to American vocalist Joe Lynn Turner.  Witnessing Blackmore play Smoke on the Water, however, had D coming in his pants, but I had attended too many Ian Gillan concerts in recent years to greet the old Purple standard with anything other than mild interest.

My only other clear recollection from the evening is of Blackmore, during the final encore (a version of Jimi Hendrix’s Fire), sneaking to the side of the stage and exchanging his presumably expensive guitar for some crappy balsa wood and plastic thing, which he proceeded to smash to pieces against the amp stack a la Pete Townshend, before tossing the resultant debris into the crowd.